\  \  Deciding How to Grow: Investing in 'The Next Most Important Thing'

Deciding How to Grow: Investing in ‘The Next Most Important Thing’

We use cookies to give you the best experience possible. By continuing we’ll assume you’re on board with our cookie policy
Let us write you a custom
essay sample on
Deciding How to Grow: Investing in ‘The Next…
For Only $13.90/page
ORDER NOW

In late October, 20 businesses gathered at the LinkedIn campus in Mountain View, California for a unique three-day boot camp. While there, they received social media and growth advice from Jeff Weiner, LinkedIn CEO; Jennifer Piepszak, CEO of business banking at JPMorganChase; and Marcus Lemonis of CNBC’s the Profit, among other experts. The 20 entrepreneurs were recipients of Chase’s 2015 Mission Main Street Grants, a program that awards grants to spur business growth. This is the first of a series of articles from that event.

During a wide-ranging Q&A session, Allen Blue, co-founder of LinkedIn, gave a surprising answer when Brian Taylor, owner of Harlem Doggie Day Spa, asked his advice about an app he wanted to develop to generate more revenue. Despite Taylor being a tech veteran, Blue told him to put the app on hold. Instead, he said business owners–and everyone else in the room–should invest their money “in the most important next thing for them.”

Any business, in any industry, has a range of choices around where to invest for growth. It can choose to boost its social media presence or spruce up its website. A business can develop line extensions and new products. The ways to add strength are endless. However, the key is to use limited resources in the most impactful way, with a firm focus on what will best contribute to overall business goals.

Taylor launched his dog spa with a clever campaign called “No Poop Left Behind,” in which he gave away plastic bags for owners to pick up after their pooches. Now, he wanted to start a mobile business, so he could expand service to high-income areas in Manhattan.

Taylor said investing money in the next most important growth step was valuable advice that was sometimes easy to forget, given that a new idea for his business swirled in his head everyday.

“There are always great opportunities, but you need to make the right investment for the long term,” Taylor said. “Instead of spending $40,000 or $50,000 to develop an app, I need to focus on maximizing my current revenue streams.” 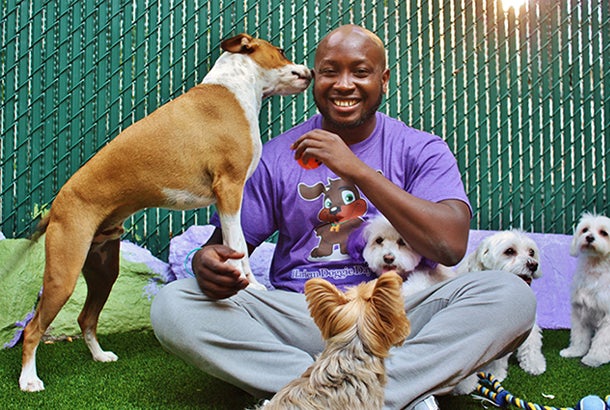 In Taylor’s case, that meant putting effort into filling up weekday slots in his dog spa. His facility can handle up to 25 dogs at a time, but typically averages eight to 10. Like a hotel, every day one of those 25 spots is unsold represents revenue that can never be recovered.

“Before I expand through an app or mobile service, I realize I needed to fill those 25 spots on a consistent basis,” he said. So he is investing in marketing, such as offering discounts to existing customers if they use his services during the weekdays.

Husband-and-wife team Jenny Goodman and Alex McCrery own Tilit Chef Goods, a company that creates and manufactures work wear for chefs, employees and home cooks. The couple says they had numerous inflection points that required them to make an important decision on where to invest to drive growth. “I got tired of the uninspiring clothing that was available in the market, and since we live in the fashion capital of the world, I figured we could come up with something better,” McCrery said.

Trying to keep their business lean, the couple originally operated out of their New York apartment. Eventually, they had trouble moving through all the boxes stacked from the living room to the kitchen. “We were constrained by the environment,” Goodman said. “We were being inefficient.” With demand growing, they even had stockouts of some of their popular items: a signal of a need to invest in inventory management.

In June, they moved to a 1,000-square-foot space in the Lower East Side. They added three more employees. “We were at another inflection point where we were doing a good job on some things, but not a great job,” McCrery says. “For me, customer service is huge–and we wanted to invest in ways that could add a little ‘wow’ to everything we do.”

Let us write you a custom essay sample on
Deciding How to Grow: Investing in ‘The Next…
For Only $13.90/page
ORDER NOW

The new staff allowed emails to be responded to much quicker. Despite a risk-adverse nature, they added one more person than they needed immediately to stay ahead of future growth.

One of the boot camp speakers, Marcus Lemonis of CNBC’s The Profit, suggested they aggressively market to the larger consumer base of home cooks rather than restaurateurs.

McCrery and Goodman are intrigued by the idea but know that’s another growth step which requires careful planning. “There are a lot more home cooks than restaurant cooks,” Goodman says. “But we need to streamline our manufacturing processes even more and get our cost of goods down before we can tackle that.” The next most important thing comes first.

Find more articles from this series